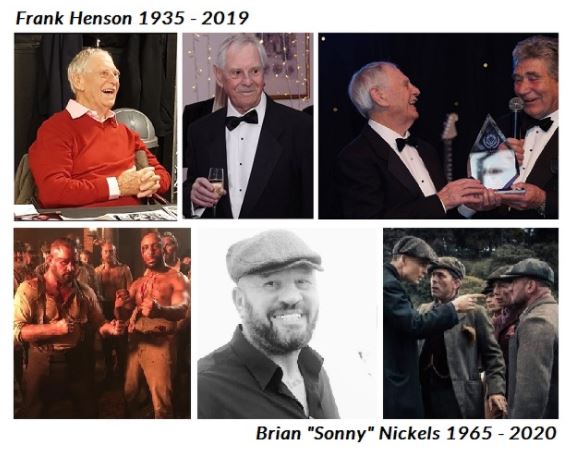 It is with heavy hearts we recall the loss of Frank Henson in 2019 and announce the most recent and sudden passing of Brian “Sonny” Nickels on 15th January 2020. Both gentlemen were consummate stunt performers and action coordinators, highly respected and well loved by their fellow British Stunt Register members and the stunt community.

Brian had doubled for Ray Winstone, Steven Berkoff and Glen Murphy. He coordinated action for TV shows Holby City and Witness and his performance credits included the runaway success Game of Thrones, and popular modern features including the James Bond franchise, Harry Potter, Avengers:Age of Ultron and Taboo.

Having doubled John Wayne, John Nettles and Trevor Eve, Frank also had his part to play for several Bond films in an earlier era. He too had coordinated action for Holby City and other British classic TV series’ including Inspector Morse and The Bill. His credit for Vikings (2016) completes the list at the end of the memoir, recalling stories from his long life and career, which he had the opportunity to publish before his death: The Luck of Losing the Toss.

BSR Here For You

The British Stunt Register provides a recognised career path for stunt professionals administered through The Stunt Grading Scheme. The scheme gives potential stunt performers an industry recognised qualification process and the opportunity to start their career as a stunt performer.